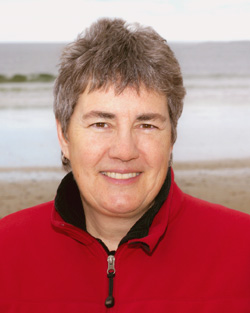 Brenda Buchanan is a Maine crime writer who sets her novels in and around Portland, Maine. An attorney since 1990, Brenda is currently hard at work on a series about Neva Pierce, a criminal defense lawyer whose hands-on style lands her in deep trouble.

Though her own law practice is now wholly transactional, early in her legal career Brenda did some criminal defense work, none of which was quite as thrilling as the cases on Neva Pierce’s caseload. That said, in nearly 30 years practicing law she’s had the good fortune to interact with many fascinating real-life characters, giving her a wealth of material to create fictional heroes and villains.

In 2015 and 2016, Brenda published her first three books, Quick Pivot, Cover Story and Truth Beat, featuring Joe Gale, a contemporary newspaper reporter with old-school style who covers the courts and crime beat at the fictional Portland Daily Chronicle. The Joe Gale series grew out of her first career as a newspaper reporter, which followed a childhood in a newspaper-reading family in a mill town in Central Massachusetts.

The journalism bug bit hard at age 16 when Brenda co-wrote an exposé about the enormous disparity in spending on boys’ and girls’ sports at her high school. The powers that be were not amused, making the experience a great lesson in the power of the press.

Brenda worked as a copyboy (no one ever said copygirl) and later a reporter trainee at the Boston Globe while an undergraduate at Northeastern University. She was a reporter and columnist at the York County Coast Star in Kennebunk, Maine before attending law school at the University of Maine.

Brenda lives near Portland, Maine with her spouse, Diane Kenty.