Posted on November 4, 2018 by Brenda Buchanan

I participated in two wonderful events at Maine libraries in the past week.  On October 26-27, Jesup Memorial Library in Bar Harbor held its fourth annual Murder By The Book conference. 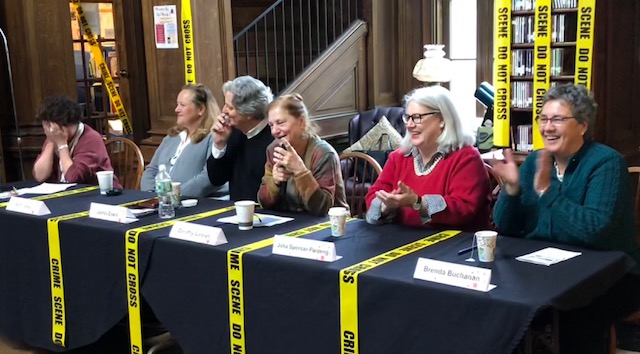 Lynne Raimondo (face in hands, at far left) did her best to herd the cats on this panel, titled “A Woman’s Place is on the Page . . . And Writing It.” We are, from left, Beth Ineson, Jim Ziskin, Dorothy Cannell, Julia Spencer-Fleming and me.

Crime writers from Maine and other parts of New England convened Friday night for a reception at which an original play was given a staged reading and writers read brief passages of work in progress.  The play was an absolute hoot! 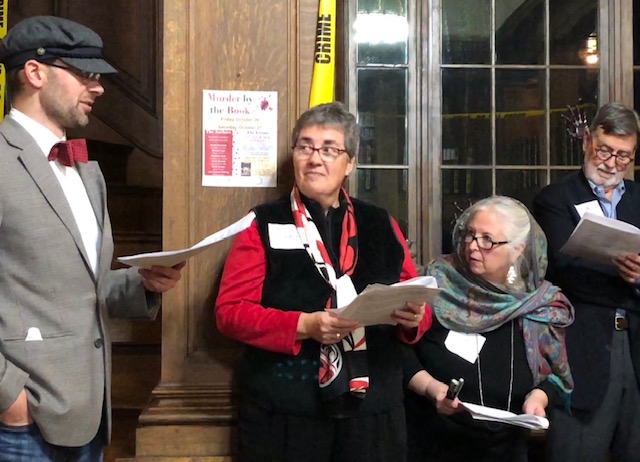 In the staged reading of the murder mystery at MBTB

Penned by husband and wife team Robert and Robin Lawton, it involved the murder of mystery writer Royal Pane on a private island off the coast of Maine during an exclusive weekend for mystery writers hosted by billionaire I. Reed Toomuch.

David Rosenfelt, second from left, was the guest of honor at Murder by the Book. I’m to his left, Julia Spencer-Fleming and Vaughn Hardacker are to his right.

Some of us performed the parts of characters with names suspiciously similar to our own (I was Brenda Buckminster, for example). It was a lot of fun.

The Saturday workshops were terrific, and the schmoozing was, as always, top notch.

On November 1, I was with fellow Maine crime writers Barbara Ross and Richard Cass at the Thomas Memorial Library in Cape Elizabeth for an interactive workshop in which we built a mystery on the spot based on suggestions from the audience about who done it and how. 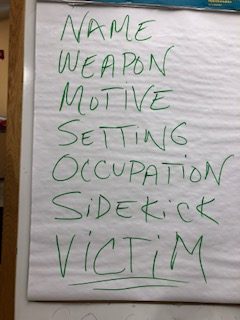 We asked the audience to make suggestions about the key parts of the book, and took it from there.

The energetic and engaged audience had us laughing from start to finish.  Thanks to librarian Janie Downey Maxwell for setting it up! 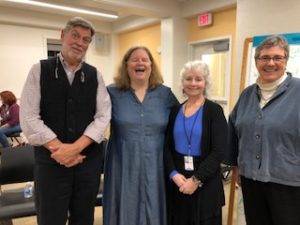