Getting Ready For What Lies Ahead

It’s mid-November, and everyone in northern New England know what that means. It’s time to put away the patio furniture, wind up the garden hoses, harvest the hardy herbs, spread mulch on the raised beds and tuck in for the winter.

Despite the fact I’ve lived in New England virtually all of my life and in Maine for the past 30-plus years, every fall I still scan that predictable newspaper article that purports to say something new about how to prepare for winter, but actually recites the same tips year after year. Check your car’s battery. Make sure you have working flashlights. Clean the furnace. We all know to do these things, so this blog post is going to be about the other stuff we do around here to get ready for What Lies Ahead.

The Annual Planting of the Bulbs. People who have recently moved here undertake this task in October, when the ground is soft. They use stand-up bulb planting gizmos like the one shown here, so they won’t strain their backs. 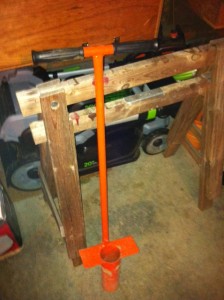 What they don’t know is if you plant those tasty tulip bulbs too early in the fall, they’ll either rot in the ground after the inevitable October week o’ rain or be devoured by squirrels. Better to wait until well into November, when holes must be chipped in the frozen soil. This proves your mettle as a Mainer and gives the squirrels a limited window of time to turn your Golden Parades and Red Emperors into their Thanksgiving feast. Because of the increased degree of difficulty inherent in late-fall planting, to create holes large and deep enough for a bulb, you will need a foam kneeling pad (trust me, the ground will feel like concrete after about five minutes), a mallet and a pointed digging device like the ones pictured here. 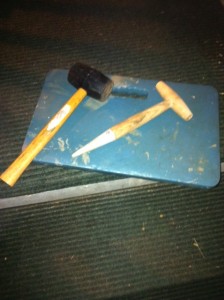 A half a day on your knees, flailing away at the hard ground will eliminate any need to go to the gym, and double the need to pop some ibuprophen.

The Inspection of the Boots. Spring fever brings boot sickness, by which I mean by April, Mainers are sick to death of the boots they’ve worn all winter. But those who have lived here for any amount of time likely have the thrift thing going, meaning we do not toss, donate or recycle our worn out boots when the crocuses bloom. Instead, we toss them in the back corner of the garage until the next November rolls around. A week or so after Halloween, we drag out the cast-off boots and assess whether they’re really shot to hell or just need a little polish and a new pair of laces. If you’re like me, you own several pair of functional (meaning not pretty) winter boots of the variety pictured here.

The ankle-high boots are suitable when there’s a little skift of snow. The mid-calf type are handy after a 12- or 16-inch storm. 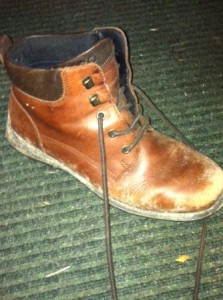 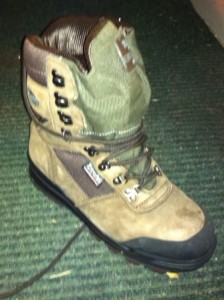 The knee-high jobs complete with  reflective stripe are de rigueur for blizzards. 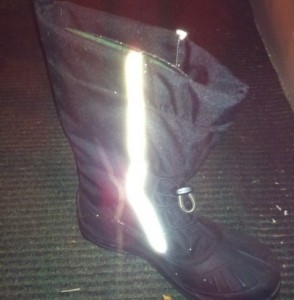 The annual inspection of the boots involves checking for run down heels and holes in the lining (common if mice took up residence sometime in the off-season). It’s important to give the boots a good looking-over, because in a few weeks, they’ll be four-wheel drive for your feet.

The Setting of the Snow Poles. The local hardware stores sell fluorescent yellow and orange fiberglass poles, that look like this.

In both rural area and suburban neighborhoods, their purpose is to mark the end of your driveway, so visitors to your home know where to turn when the snowbanks are high. Snow poles also signal to the plow guy where you want them to push the snow. Left to their own devices, some snow removal professionals of my (past) acquaintance have been inclined to push their blade across the entire front lawn, gardens be damned. The ritual setting of the snow poles is one of the last of the fall tasks, an acknowledgment that December is nearly here and plowable snow is imminent. At our house, we set the snow poles the weekend before we hang the garland on the front door, a task I can tell you from experience also is best done before the snow flies.

But Maine holiday decorating is a post for another day. Now’s the time to chisel those bulbs into the ground, scrutinize the boots and buy some snow poles. Ready or not, here it comes.