The Joy of January Beach Walks

We’ve enjoyed several spectacular Sunday beach walks this month. It occurs to me on this last day of January that it’s time for a little show and tell. Compared to last year, the footing has been good, but the height of the tide always informs the walk, a truth borne out in spectacular fashion this week and last.

On Sunday, January 24, thanks to Winter Storm Jonas, much of the eastern seaboard was buried under a couple of feet of snow. Not a flake of snow had fallen in our part of Maine because Jonas blew out to sea before it reached us. The sun was shining and the roads were dry as we drove out the Black Point Road in Scarborough. The pathway that cuts through Massacre Pond was nicely packed and there was some wind, but the air wasn’t too nippy. We heard the surf long before we reached the little rise that leads to Scarborough Beach. 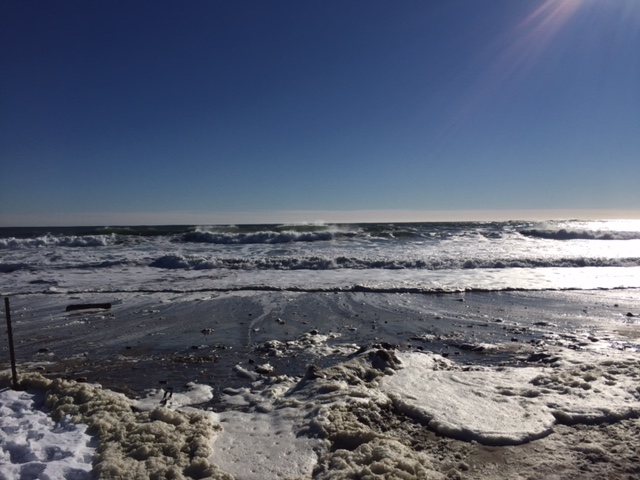 The surf was up at Scarborough Beach after Jonas shot past Maine, just far enough offshore to spare us the blizzard it brought to the rest of the Eastern Seaboard

In addition to the meteorological impact of that huge storm spinning by just off the coast, the moon was full on Saturday night. This made for a spectacular Sunday morning high tide, leaving no beach to walk at 11 a.m. Waves rushed up the beach to the to the main pathway, kissing the dune grass before receding back across a beach strewn with storm detritus. It felt wonderful to stand there on a blue sky morning, watching the riled-up sea.

Today we took ourselves to Popham Beach in Phippsburg, where the tide was low and the beach enormous. It was north of 40 degrees after a week of similarly warmish days, which meant no snow or ice underfoot. 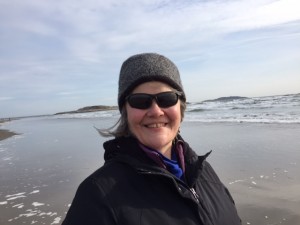 A glorious day to walk the broad beach with Diane.

Popham Beach always sends my imagination into high gear, because it’s near the spot where a colony of settlers settled briefly in 1607, near the mouth of the Kennebec River. Whenever I’m there I feel the urge to re-read the history of the Popham Colony. 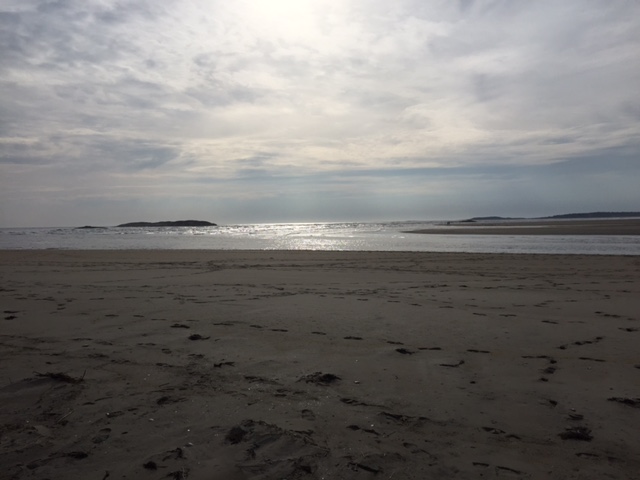 An expansive Popham Beach on January 31.

It was stunningly beautiful today with the tide way out and the sandbars visible. We passed an enormous hunk of driftwood, an entire tree trunk complete with roots that the sea has scoured clean. 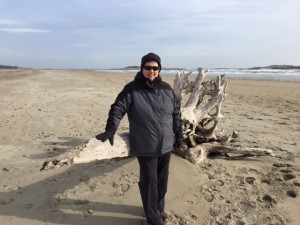 Summer visitors to this popular spot probably can’t imagine it this empty. January is a special time to walk a Maine beach, even when it’s cold, but especially on a mild day like today, when you can almost convince yourself spring is around the corner.

Tomorrow—the first day of February—will be a celebratory one, because it’s release day for TRUTH BEAT, the third book in my Joe Gale series.  In TRUTH BEAT Joe is back in Riverside, covering the suspicious death of a Catholic priest and investigating a series of bombings near the high school.  I hope those of you who have come to know and love Joe will enjoy reading it as much as I loved writing it.