You’re Going to Sue the Church?

If you haven’t seen Spotlight, you really must.

The recently-released film starring Michael Keaton, Rachel McAdams and Mark Ruffalo is the based-on-fact story of how a team of investigative reporters at the Boston Globe peeled away decades of lies and denial to expose how the hierarchy of the Catholic Church covered up decades of sexual abuse inflicted upon children by parish priests. It is an important film, both for the story it tells and the way the story is told.

That question – you’re going to sue the church? – is uttered repeatedly in the first hour of the film. People inside and outside the newspaper were stunned by the notion that the Catholic Church could successfully be called to account in a court of law. At the outset, even those on the Globe’s vaunted Spotlight Team – a small group of investigative  reporters who’ve won accolades over the years for their hard-nosed journalism – were amazed enough to ask the question.

We’re going to sue the church?

In famously parochial Boston, the idea of petitioning a court to unseal records that the Catholic Church wished to keep private was unfathomable. The church wasn’t just plugged-in to the power structure, it was a load-bearing wall of the power-structure. Like certain banks and other financial institutions deemed too big to fail, the church seemed too big to sue. What petitioner would dare to try to expose not only the names of abusers, but the pattern of lies and favors and looks the other way that allowed the abuse and the cover-up to continue? What judge would ever grant such a motion?

You’re going to sue the church?

The Globe did exactly that. Judge Constance Sweeney shocked the powerful by ruling for justice. And the walls came tumbling down. 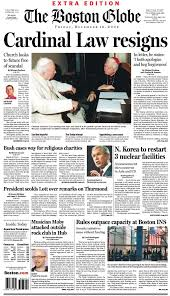 The weekly Boston Phoenix was actually the first to surface the fact that priests accused of abuse were being quietly transferred around the diocese, moved to unsuspecting parishes where they offended again and again. But the Phoenix was a small-circulation paper that didn’t have the resources or clout to carry it through. Though slow to realize the scope of the story, the Boston Globe, where I’m proud to have done my early journalism training, eventually went all in.

Its Spotlight Team reporters knocked on doors, made cold calls, pored through documents, asked hard questions and did not sleep until they had the full story. Not the tip of the iceberg, the whole ugly, tragic story. The impact of the clear-eyed courage of the newspaper’s reporters and editors continues to be felt today.

The protagonist in my Joe Gale books works at a far smaller newspaper, but his approach to journalism is similar. Trained by an old-timer, he approaches his work as the higher calling that it is. It’s no secret that Joe and some of the other characters in my books are inspired by reporters and editors with whom I worked many years ago as well as those who are my friends today. It is my fervent hope that Spotlight will result in renewed respect for them and all journalists at newspapers in large communities and small, the overworked and underpaid men and women who report and write the stories that aim to keep powerful forces honest.

So see Spotlight. Weep for the children. Curse the criminals who allowed it to go on and on and on.

Then spend some time talking with your friends – really talking – about where we will be as a society if we don’t find a way to support the financial health and independence of small newspapers as well as large ones, in Maine, Boston, Washington DC and everywhere else, too.