Amazing day, this one.

After 55 years and 28 days on this earth, my right to full-throatedly speak my heart’s truth has been realized.

The law extending marriage rights to same-sex couples in Maine took effect at 12:01 a.m. My love and I were standing in the December cold in front of Portland City Hall, surrounded by laughing, weeping, singing, dancing, delighted people.

Having known I was gay before I even knew the word, I never imagined myself being married. It was simply out of the question. An experience beyond my reach. And, I thought for many, many years, something I did not deserve. Eventually I began to question the assumptions underlying that belief. Through both the women’s movement and the gay rights movement, I started my personal march toward this happy milestone, one step at a time.

I sought out others like myself and supportive allies. I joined collectives and staffs and boards. I stuffed envelopes, made signs, marched in parades. Most importantly, I came out, to family, friends and co-workers. The process veered between wondrous and bruising. There were some places I could go, others where I was clearly unwelcome. But there was no going back, so I grew tough skin. Arm in arm with hundreds of others fighting for the same respect, we kept moving forward.

Eventually, I met my beloved Diane. In our fourth year together we were married – on May 28, 2005, in the lovely village of Ste. Petronille on Ile d’Orleans, outside of Quebec City. It was an ecstatic experience I never imagined for myself – to stand in front of family and friends and proclaim my love, to publicly announce that I was ready to assume the rights and the responsibilities of marriage.

Problem was, because Maine didn’t recognize marriages between same-sex couples, when we re-crossed the border, we were still single in the eyes of the law. For seven and a half years, we have lived with that dissonance. Our marriage was no symbolic thing. It has always felt as real as the tides and the moon to us, even if Maine law didn’t see it that way.

We’ve been honored to be part of the push for marriage equality in Maine and were swept by emotion this past November 6 when the voters in our beloved state said Yes.

Yes, your marriage counts. Yes, the law applies equally to you. Yes, your love deserves to be honored.

So last night, with my arms wrapped around my wife, we counted down the seconds to midnight, surrounded by love and light and unbridled joy. 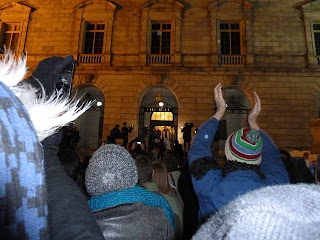 Big congratulations go to all of those who tied the knot last night and today, in communites large and small across the State of Maine. And high-fives to all of the prodigal couples like us, who were compelled by love to go elsewhere – Massachusetts, Vermont, New York, Canada – to say our vows before Maine was ready.

Yesterday we were single. Today we are married.