Posted on January 8, 2012 by Brenda Buchanan

A sweet day today on the coast of Maine, not warm as yesterday, but lovely nonetheless. We walked at Crescent Beach, where the water was calm and the breeze was light. Here’s a photo from the bluff at the southwest end, looking toward Richmond Island. 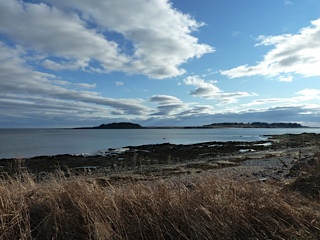 This particular beach is the setting for one of my favorite scenes in my work in progress, The Quick Pivot. It came together more easily than any other scene, and has needed the least revision.

My work this weekend on the QP has gone well. I’m about done with the personality transplant on that key female character and at least to my (admittedly biased) eyes, it’s working. My pal and beta reader Maureen will be giving it a look next week. We’ll see what she says.

On Monday I said I’d write about the books I’m eager to read in 2012. Here are five that make me long for an unencumbered day to curl up under a blanket on the couch and read without interruption:

1. The Most Dangerous Thing by Laura Lippman. I’m knee deep in this one now. I’ve enjoyed a number of Lippman books in recent years, especially those featuring kick-ass investigative reporter-turned-PI Tess Monaghan. This is her most recent standalone. A hundred pages in, I’m captivated by her characters and her plotting prowess.

2. 11/22/63 by Stephen King. I’d need two unencumbered days to read this start to finish. And a pot of soup on the stove, so I wouldn’t even have to stop and cook. Peanut butter and jam sandwiches would work, too. I know from the reviews this one will be difficult to put down.

3. Trick of the Dark by Val McDermid. I was slow to find this wonderful writer, can’t wait to read this mystery, set in Oxford, England, about solving the murder of a groom just after he took his marriage vows.

4. Started Early, Took My Dog by Kate Atkinson. Also set in England, and featuring a male protagonist written by a woman (like the QP). I know the story involves saving a child and a dog. Should be great.

5. Clawback by Mike Cooper. This won’t be released until March, and I’m counting the days. Mike, who I’ve chatted with a couple of times at the New England Crime Bake, has written a tale of an assassin taking aim at Wall Street financial guys who are underperforming, and the push back from the powers that be. It sounds like a fascinating read.

Time to move on to other Sunday night activities. Enjoy the start of your week.