Celebrating 2015 With A Revelation

Posted on January 1, 2015 by Brenda Buchanan

In 2015, after a lifetime of working at this goal in one way or another, my first novel will be published.  I’ve been waiting for a couple of weeks for the right day to officially reveal the cover of Quick Pivot.  New Year’s Day seems the right time to launch the image, so here it is! 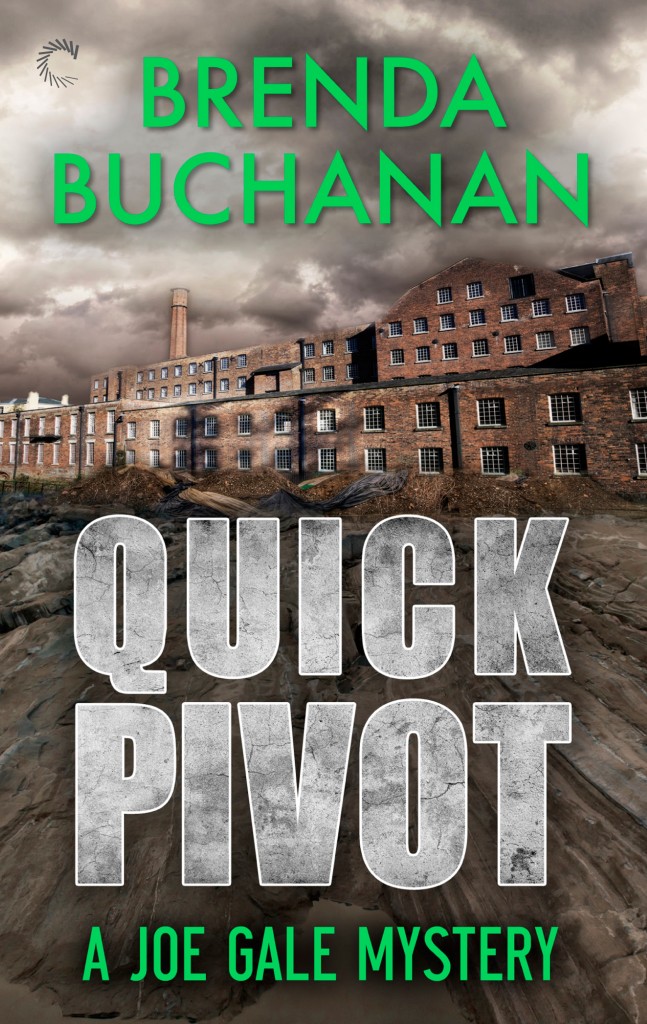 The cover for Book #1 in the Joe Gale Mystery Series, coming April 27, 2015 from Carina Press

Newspapers are fading to oblivion. Even if print could hold its own against TV news, the ever-evolving internet and a tweeting army of citizen journalists will soon put an end to old-fashioned newsgathering, especially in a media boondocks like Maine. Joe figures if the end is inevitable, he may as well go out kicking and hollering.

He covers the crime beat for the Portland Daily Chronicle, but unlike his late mentor, legendary reporter Paulie Finnegan, he carries a laptop as well as a reporter’s notebook, and his stories appear both in the tangible newspaper and on the web. Resourceful, stubborn and capable of flipping on the charm switch, Joe ignores the obituary being written for his profession as he chases stories across the State of Maine.

In Quick Pivot, his discovery of the facts behind a four-decade old murder exposes long-held secrets of people who hoped they’d never be held to account for their youthful sins.

It will be released in digital format by Carina Press on April 27, 2015, available here http://ebooks.carinapress.com/ or any other seller of e-books.

I amused myself this morning wondering what my characters did last night to celebrate the arrival of 2015.

Joe Gale would have offered to work New Year’s Eve.  In 2014 the woman who owned his heart left on a long-term medical mission in Africa, and it’s taken him months to accept that he was into her a lot more than she was into him. While his New Year’s resolution almost certainly would have been to stop pining for her and get on with his life, Joe probably went home to Riverside at 10 o’clock and toasted the arrival 2015  with his dog, Lou.

Christie Pappas, owner of the diner known as the Riverside Rambler, likely had a frustrating evening. She would have prepared a fabulous dinner for her longtime boyfriend Arn Giroux–perhaps sautéed local diver scallops and roasted carrots. The feast would have appeared to put him in a celebratory mood, but when she suggested they head over to the Maplewood Dance Center for some New Year’s Eve ballroom dancing, he would have begged off, claiming a headache. Christie’s New Year’s resolution? To figure out why she stays in a relationship with a man who won’t take her dancing, even on the last night of the year.

Christie’s 16-year-old son Theo and his buddies would have done what many Maine teenagers did on New Year’s Eve–hung out in the man cave at someone’s house, watching movies and guzzling the beer they smuggled past the parents upstairs.

Tom MacMahon would have stayed up until midnight at his Kennebunkport retirement community, waiting for the ball to drop on his 84th year. Joan Slater would have done essentially the same thing, and made a resolution to stop smoking–or at least cut back–in the new year. Helena Desmond almost certainly would have been part of a progressive dinner on Peaks Island and lurched home around midnight, feeling sentimental about having such wonderful friends.

You will meet these folks in 2015 if you read Quick Pivot, which I hope you will.

My New Year’s resolution is to finish the edits on the second book in the series, Cover Story, and to continue having a good time writing the third, Truth Beat.

2 Responses to Celebrating 2015 With A Revelation