Posted on September 27, 2015 by Brenda Buchanan

Maine’s crime writing community invaded Bar Harbor the sunny weekend of September 18 – 19 to hang out with readers and other writers at the inaugural Murder By The Book conference sponsored by Jesup Memorial Library.

Imagine this crew, together in one small town. 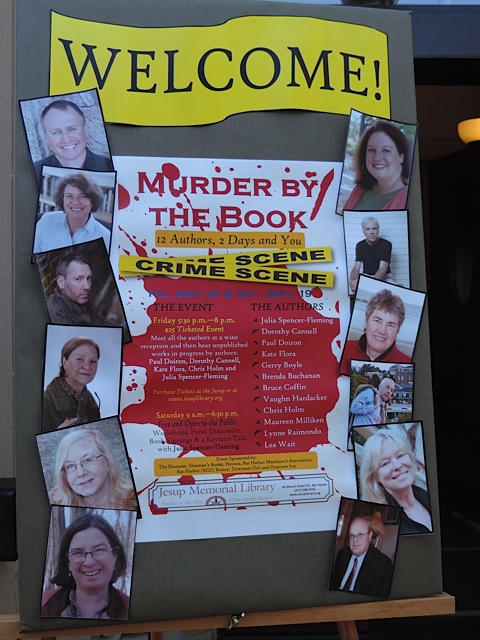 The author lineup at Murder By The Book in Bar Harbor.

Friday night Julia Spencer-Fleming, Chris Holm, Dorothy Cannell, Kate Flora and Paul Doiron read work in progress. Those five also participated in Saturday panels and classes, along with Lynn Raimondo, Gerry Boyle, Lea Wait, Bruce Coffin, Maureen Milliken, Vaughan Hardacker, and me.  It was an honor to share the bill with so many talented writers.

Two masters of the craft, Julia Spencer-Fleming and Chris Holm, teaching a workshop on suspense.

I moderated a panel titled “Real World vs. The Page,” which focused on what crime writers do right and wrong in their portrayal of murder investigations, trials and the natural tension between cops and reporters. 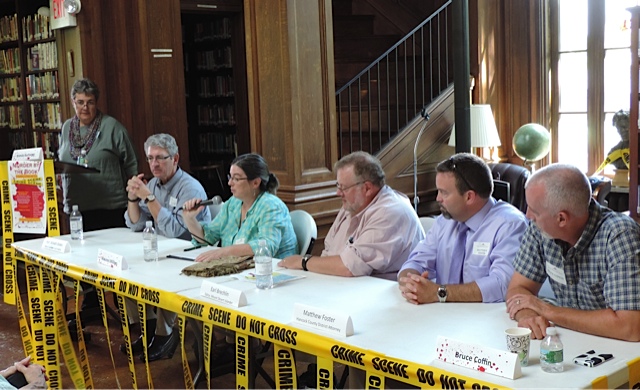 I got a special kick out of this panel because in my just-released book Cover Story, newspaper reporter Joe Gale is covering a murder trial in Machias, which is well outside his regular turf. While he’s getting the lay of the land, the politically-wired prosecutor tries to sweet talk him and the inexperienced defense attorney is afraid to say much of anything. Just like in real life, Joe has to figure out whose words are reliable and who has ulterior motives.

Here I am moderating the “Real World vs. The Page” panel.

On the panel, Hon. William Stokes, for many years the chief prosecutor in the criminal division of the Maine Attorney General’s Office and now a justice of the Maine Superior Court, spoke about murder cases he’d tried and the delicate relationship between the prosecutor and the press.

Retired Portland Police Department Det. Sgt. Bruce Coffin, who spent decades investigating major crimes in Maine’s largest city, talked about how important it is for police to gather evidence with painstaking care, even when there is tremendous public pressure to make an arrest.  (A multi-talented guy, in retirement Bruce has been writing crime fiction himself. One of his short stories will be published in Red Dawn, this year’s Level Best Anthology of New England Crime Stories, to be released in November.)

Newspaper editors Earl Brechlin of the Mount Desert Islander and Maureen Milliken of the Kennebec Journal and Waterville Sentinel (also a debut author this year with Cold Hard News), offered insight about the relationship between the press and the police, as did Hancock County District Attorney Matthew Foster, elected just a year ago, but already aware of that particular symbiotic connection.

I was also on a panel that focused on writing protagonists of the opposite gender, moderated by Gerry Boyle, whose most recent Jack McMorrow mystery is Once Burned. 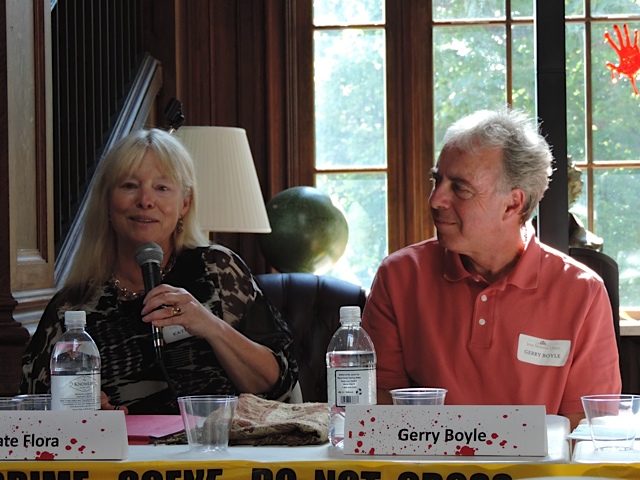 Kate Flora and Gerry Boyle during the so-called Sex Change panel. Note the bloody hand in the background.

Kate Flora spoke about her protagonist Joe Burgess, who has morphed over the course of the series from a monk-like detective into a man trying to balance family with the demands of investigating murders on the mean streets of Portland.

Mark Angelotti, the protagonist created by the remarkable Lynne Raimondo, is male, blind and a psychiatrist, while she is female, sighted and a lawyer by trade. Obviously, Lynne likes a challenge.  It was my first opportunity to hear her speak and her books are now on the top of my To Be Read pile. 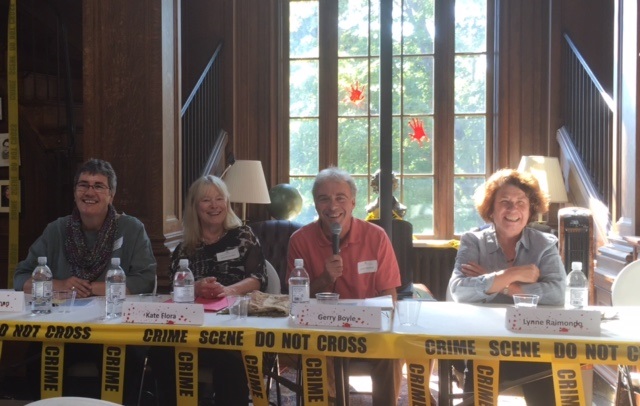 A light moment during our discussion about writing protagonists of the opposite sex. From left, me, Kate Flora, Gerry Boyle and Lynne Raimondo.

I spoke about Joe Gale, of course, the guy who showed up in my head eight or nine years ago and insisted I tell his story. He is brave, smart and understands why local journalism matters. I like to think I was the same when I was a reporter, and that my work does justice to all of the reporters out there who knock themselves out every day to bring us the news we need to be thoughtful, informed citizens of our communities. 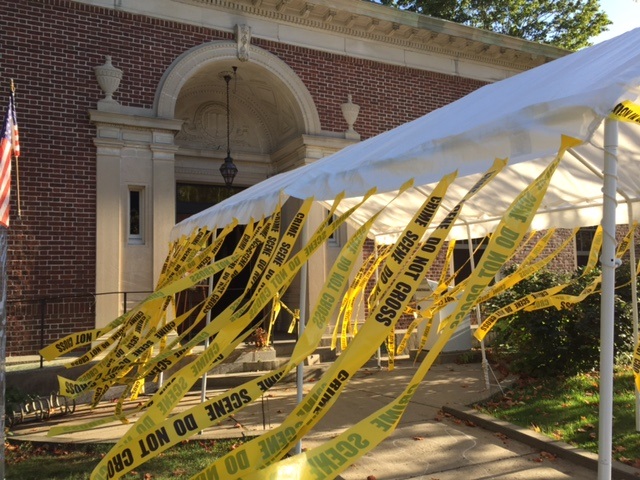 The entrance to Jesup Memorial Library was eye-catching.

The good people at Jesup Memorial knocked themselves out to pull off this conference, and already are busy at work planning for next year. Many thanks to them for all of their efforts this year, and for delivering such a picture perfect weekend on Mount Desert Island.